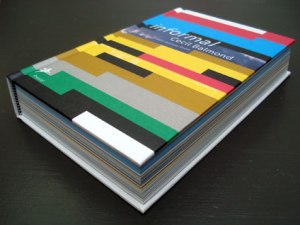 It never crossed my mind that Cecil Balmond would some day write a book. It’s a courageous thing for him to do. And as there are so few books by engineers I expected something absolutely stunning. So, clearly, do his collaborators in Informal. I read it with an open mind, and I wanted it to be very good indeed for all our sakes.

Great expectations, and for an engineer the physicality of his book doesn’t disappoint. Balmond’s book “Informal”  certainly understands the importance of gravity. It is satisfying heavy, chunky, and even has a hard back. But would it have a spine too?

In the introduction, Charles Jencks muses on the concept of Balmond: ‘engineer, designer, architect, thinker with numbers, speculative mathematician, writer: what is he if not all these things?’ Not a good start. Surely if you allow a question like that into the public domain you deserve an answer?

If I assume he is all those things, is he any good at them? How does Balmond the engineer and architect and more compare with others of that ilk – Leonardo, Nervi, Candela, Peter Rice, Calatrava, Maillart, Brunel. All of these have placed their mark on their projects to the point where they are directly attributable and recognisable.  On the evidence of Informal, Cecil’s work doesn’t reach that level. Nevertheless it occasionally meanders along some interesting little footpaths. He is better known at Arup as a fine businessman: politically aware, financially capable, a little ruthless, commercially astute, not a little ambitious, with intriguing extra-curricular  gifts as a classical guitar player. He can multi-task, is very controlled, and relishes exercising his intellectual muscles. For many these accomplishments would be sufficient. But Cecil’s book shows he wants more: after 30 years he is putting himself and his ideas as a designer up there to be shot at. Is this courageous, foolhardy, stimulating, or simply a stretching of the ego? Or even better, and I hope this is the truth, just the engineer as pop culture.

The book’s swanky Mondrianesque cover was encased in vacuumed shrink-wrapping which reminded me of a selection of summer fruits. And sure enough, unwrapped, the introductions by Charles Jencks and Rem Koolhaas were pretty ripe. Their introductory paragraphs didn’t strike me as ‘Informal’, only manipulative and infuriating, and wafted to a conclusion before I had even reached Cecil’s first words. The implication was that if I didn’t agree with them I was somehow unable to understand. Great minds they may be, but it is never pleasant to experience this kind of hype before you’ve even read the words of the author. If I read a book, I want to make my own mind up. And I’m sorry to say that Cecil was fighting an uphill battle from then on.

In his manifesto, Balmond says “the Informal is an approach to design that seizes a local moment and makes something of it.” Although this could equally apply to jumping and bandwagons, the evidence in the book shows that it can easily translate into whimsy. Nevertheless Balmond makes a manful attempt to rationalise the irrational. Every great pop offering needs a great hook, but the ‘Informal’ just doesn’t do it for me. It’s rather contrived, just an excuse to jump from one rather wilful thought to another within a conventional ‘this is my project’ framework. By page 50 – ‘trapped by a Cartesian cage I wanted to break out’ – I knew exactly what he meant. I wanted to get out of there too. And I was followed everywhere by a lurking suspicion…I found myself asking whose ideas these actually were. Who really dunnit? The generous end credits show lots of people involved in the projects, which begs the question was Cecil the generator, assimilator or is he just the marketeer?

I looked hard for some essential truth, but much of the book is a makeweight repetition of classical maths rather than moments of great insight. Balmond repackages the equations of a spiral and even bothers to re-derive the golden section when Corb did it last century, as has every generation before that going back to ancient Greece?

I would have enjoyed much more about the ‘why?’ rather than the ‘what’. Much more on the role of these Informal ideas in the world that we all want to inhabit, the world of people, nature, places, living. Balmond waxes lyrical about slipped rectilinear or spiral geometry and I suppose we could all redesign our favourite projects using them. Who is to say who’s right…….it’s certainly beyond me. Many of the apparently underlying geometrical roots of the Informal Balmond approach to engineering solutions don’t justify themselves as architecture. In fact they aren’t Informal but exactly the opposite, very precise mathematical formulations with closed, inevitable solutions. They simply depend on the boundaries that are set, deliberately, at the outset. Cecil’s rationalisations sometimes border on the trivial: for the V&A Spiral he says, ‘I advocated concrete or steel to maintain the daring alignments’. I can just hear the construction industry breathing a collective sigh of relief. And on the same page: ‘We exchanged metaphors (presumably Daniel Libeskind and Balmond)’. By this time I was tempted to read this as ‘We exchanged the introductions to each others’ books’.

In amongst the glitz there are some nice tricks – it’s great to see the built effect of a slipped grid and Balmond has a way with patterns that the reader can absorb and then dip into later. But then it becomes worse again. Much worse.

I’m afraid I never liked the over-ambitious Koolhaas masterplan for Eurolille with its unsustainable relationship of towers to railway and simply megalomaniacal Congrexpo. Nevertheless in the name of research I waded through Cecil’s piece about his return visit to the scene of the crime (a rare enough thing for a structural engineer to do). The writing felt over large, over blown, a filler, justifying the unjustifiable. Here we even find a piece of Balmond’s engineering, the timber lath beams that are all right but not worth a chapter in a book. You might compare this chapter say to Stephenson and Fairbairn’s fabulous pioneering paper on box girders from 150 years ago. That effort culminated in the Britannia Bridge over the Menai Straits and the technology is still in use all over the world today.

Then all of a sudden, Informal surprises you. There is the absolutely beautiful suspended concrete ribbon for Siza’s Portuguese Pavilion. And Francis Archer’s tuneable spreadsheets for the V&A spiral. And the organic flux lines of Arnhem Station. All very seductive. But not the Chemnitz stadium, which begins as poetic but ends up facetted, polygonal and heavy, or “Informalised”. To me, the best projects appear to fly in the face of the Informal theorizing. Or are driven by another hand. I suspect that Alvaro Siza would have come up with something exquisite for the Portuguese Pavilion using any number of good engineers. He certainly could have managed perfectly well working with any of the pioneers of shell construction from 50 years ago and wouldn’t have needed this book.

I also found myself asking if some of the theories have been overtaken by recent developments in manufacturing and design technology. If the cutting machine finds it just as easy to make a squiggle as a square, I’m not sure what Balmond’s mathematical justifications offer us. They may even turn out to be overly restrictive, from a world before 3D Studio, Rhino and Microstation, even before Excel, before Cadcam, solving a problem that doesn’t exist any more.

My hopes that Informal would reveal a hidden talent and a profound insight have been dashed. Doubly so because I admire Cecil for his undoubted achievements elsewhere. The cricketers of his native land are expert purveyors of spin, luring the unsuspecting into their powers, and Informal seems to have learned a lot from them. How much Balmond himself has to do with the gimmicky presentation isn’t clear, but the style often gets in the way of what substance there is. Reading the book I feel I am being manipulated into believing something that doesn’t appear to be justified by the evidence.  That just makes me rebellious, and I suppose it’s a good thing to provoke such a response.  At one stage I even tried not to submit this review, as I didn’t want to damn his efforts, but I think the book cannot pass without comment.

In Balmond’s own words “The Informal gives rise to ambiguity. This means interpretation and experiment as a natural course of events.” My interpretation of his efforts are that it is an experiment in the Emperor’s new clothes, mutton dressed as lamb, not to mention the repeated skinning of a much-abused cat. It’s a useful book nevertheless, containing many lessons to be taken but maybe not the ones intended by the author, his editor and their graphic designer.  Paradoxically this might be where the book is most valuable. There’s no question that structural engineering and architecture could both do with a rocket up the whatsit, and a well-directed whack with “Informal” would probably be as good as anything, just to send us off in another direction for a bit. The engineer as an identifiable brand is long overdue, and Cecil’s presentation of himself and his ideas allows us to treat him and them as we might a politician or a fashion house. Even though I don’t much like his book, he is to be congratulated in helping this to happen so that a bit of honest opinion can prevail in the industry.  We will all be the heathier for the debate if not necessarily the philosophy he puts forward.